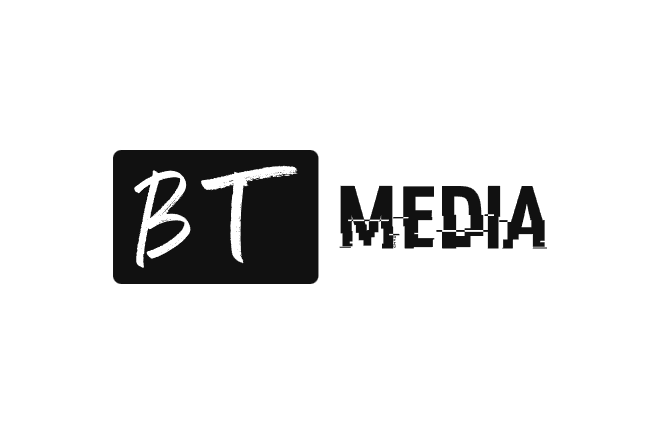 I received a letter from the spouse of a teacher at Navarre Middle School in South Bend, IN.

There was a massive fight that broke out at Navarre Middle School on Thursday, April 14.

Concerned citizens took to social media to express their frustrations over another incident at the school. 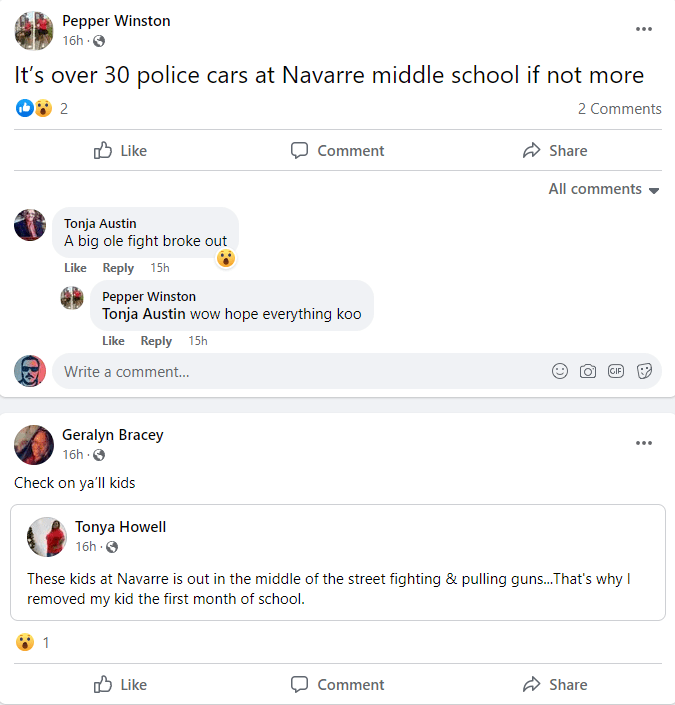 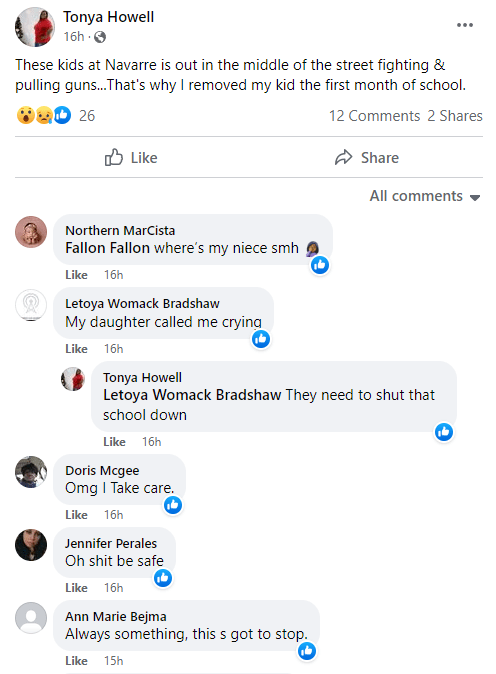 The letter from a concerned spouse of a Navarre teacher confirms the events people were posting about online.

There was a Malay of fights after school. It was inside and outside. One child told a teacher to move or I’ll shoot you.

My wife tried getting kids back inside.

She was struck once. Kids screaming gun!

The letter also spoke about security at Navarre:

My wife is traumatized. I’m sure there are a lot of kids that are too.

There is no security to speak of.

This is not the first gun and I believe it’s just a matter of time before there are deaths.

Posts on Facebook indicated when police did arrive, there were numerous officers on the scene.

I reached out to the South Bend Police Department about the fight at Navarre. Here’s their statement:

I can confirm our officers responded to reports of a fight at Navarre Middle School yesterday just after 4 pm. However, while a sizable crowd had formed, our officers only observed two juveniles actively fighting while we were on the scene.

No gun was recovered.

As with most cases happening on school property, any additional information will need to come from South Bend Schools.

I requested comment from Navarre directly but the school is closed today for Good Friday. I’ll update the story when/if I get a response.

As of right now, Navarre has not posted about the incident publicly.

In June of 2021, Real News Michiana revealed that Jasmine Brown, an 8th grade Social Studies teacher at Navarre was teaching CRT and advocating for Black Lives Matter in her classroom. Jasmine Brown was also Navarre’s Teacher of the Year for 2020-2021. Some of her lessons included how the prison system is designed to over incarcerate minorities and is a modern form of slavery.

As Real News Michiana’s investigations into Navarre continued, we learned that a local police hating BLM activist was promoted to Dean of School Culture at Navarre. Regina Williams-Preston called for police to be removed from schools at a press conference in May 2021.

“This is a public call to school board members, district administrators to do your job, uphold the law and remove police from schools now.”

She has also been tied to Eli Cantu, a local gang member.

Valeria Chamorro taught social studies at Navarre and was promoted to an Assistant Principal position. She repeatedly posted “All Cops Are Bastards” online.

Another SBEZ school had a viral moment when a South Bend Police officer was thrown out of Coquillard Elementary School during a standard community walkthrough by the CEO of the South Bend Empowerment Zone.

“Okay, yeah. And it’s not that, I wouldn’t say blanket uncomfortable. We’re just breaking from a lot of past practices to the prior years.”

Dr. Camacho is also in charge of Navarre Middle School.

From the top-down, SBEZ schools like Navarre Middle School are not focused on student education and safety. Rather than focusing on classical education, they are propagandizing students with CRT, 1619 Project lies, and BLM radicalism. Meanwhile, Navarre continues to fail students.

Great Schools gives Navarre a 1 out of 10 rating.

The Indiana Department of Education shows Navarre is WELL BELOW the state average in statewide assessments. 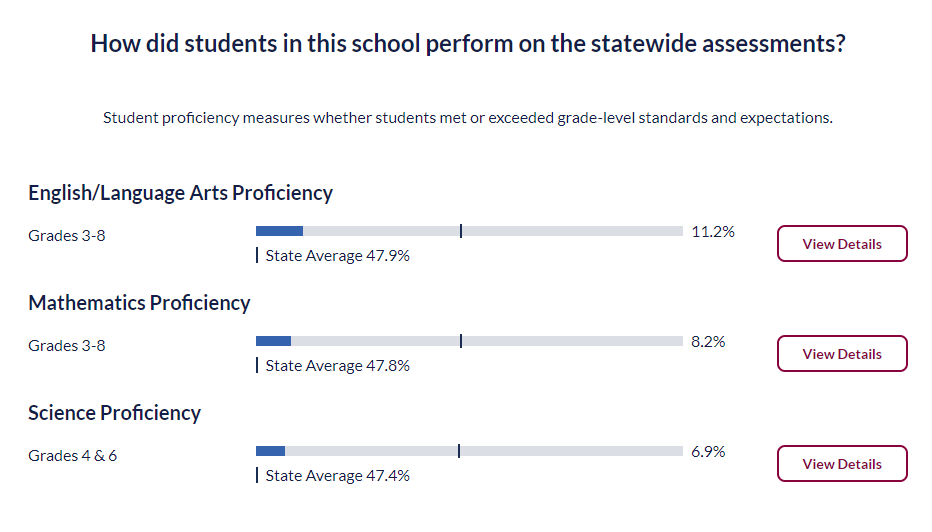 Navarre students are also well below the state average for student growth towards proficiency. In other words, the school is failing to bring students up to speed so they can become proficient.

Beyond the violence discussed at the top of this article, disciplinary issues are also a major problem at Navarre. 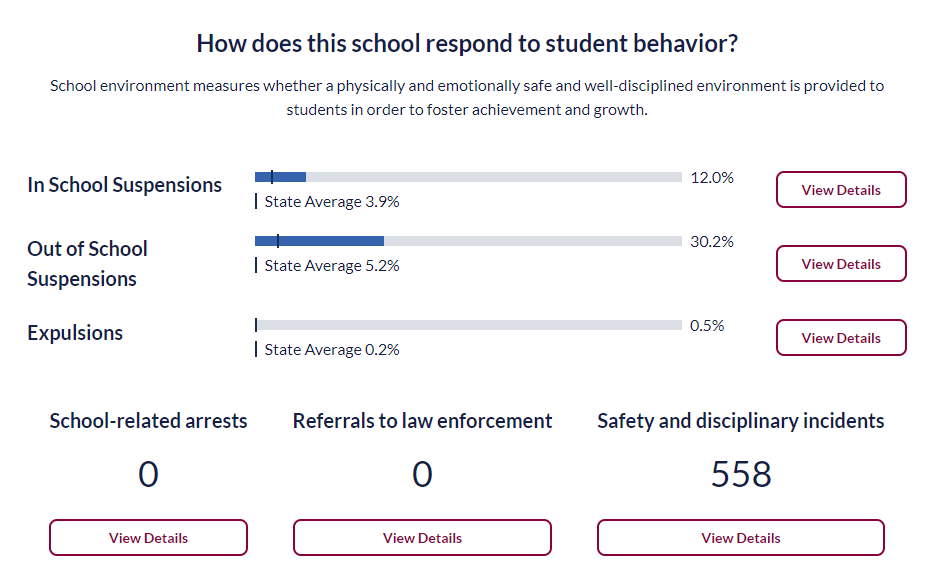 Their student-to-teacher ratio is equal to, or better than, the state average of 17:1. I’ve found some that calculate their ratio as being closer to 14:1. They are rated as the second-best in South Bend for student/teacher ratio.

Schools with similar demographics in Indiana outperform Navarre by wide margins according to the Indiana Department of Education.

This is a school filled with social justice activists in an Empowerment Zone run by social just activists and they are absolutely failing minority students.

Perhaps Navarre faculty needs to start focusing on education and discipline and less on activism.

There is no better example than Navarre Middle School to support parental school choice.